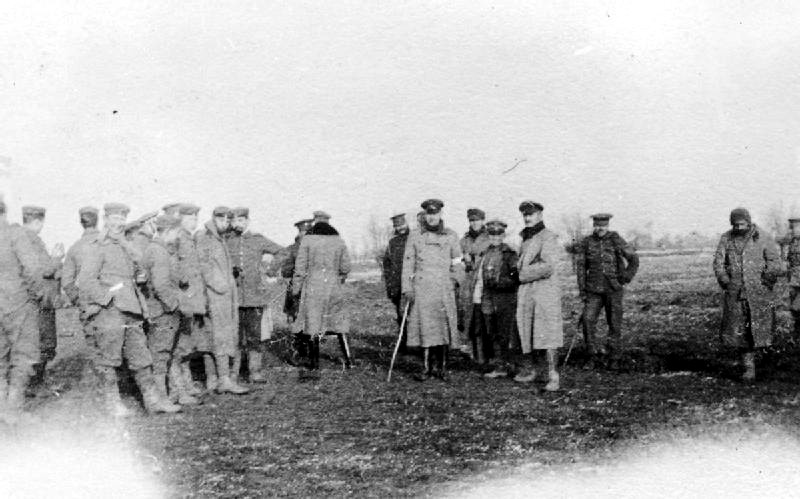 What Does the Christmas Eve Truce of World War 1 Teach Us About Culture?

The First World War (WW1) had a catastrophic impact on human life with an estimated death count totalling 37 million. Many perished as a result of the war itself, but a significant number of lives were also lost due to the side effects of war. Namely poverty, malnutrition, lack of shelter, and the disease infestations that followed.

The conditions soldiers endured were deplorable. Much of the fighting was done from trenches dug by soldiers at elevations below sea level which caused a constant state of flooding, cold, and saturation. It made it difficult to keep feet dry and warm which lead to a condition known as “trench foot” and the trenches themselves became breeding grounds for disease, rats and lice.

But perhaps the most horrifying of fighting conditions was the proximity of enemy trenches. In some cases, they were only 7 feet apart. Imagine trying to sleep knowing your enemy is closer than the height of a basketball net from you.

As unlikely as it might sound, this gave way to a miracle of sorts in December 1914; a Christmas Eve truce. As the story goes, a German soldier climbed out of his trench unarmed and fully exposed waving his hands in the air and yelling something to the effect “please, don’t shoot. I am unarmed. It is Christmas Eve, please, don’t shoot.”

Skeptical that it was a deceptive attempt at a surprise ambush, Allied Forces held firm until more German soldiers began emerging. Before long, soldiers from both sides were climbing out of their trenches to cross enemy lines and join in Christmas fellowship.

They shared food, built makeshift Christmas trees, and took turns trying to outdo each other in their native Christmas carols.

It would be easy to conclude the truce occurred from a momentary lack in judgement brought on by a jolt of Christmas spirit but there’s much more to the story. In fact, conditions for the truce had begun, unbeknownst to the soldiers, weeks earlier.

According to detailed accounts from “Trench Warfare 1914-1918” by Tony Ashworth, what had really occurred were a series of “mini-truces” which set off belonging cues which caused soldiers to begin seeing themselves in their enemy.  In other words, they began to empathize with the very people they were sent to kill.

According to Daniel Coyle in his best-selling book “The Culture Code”, soldiers on both sides, because of proximity to each other, started noticing shared patterns of behavior and routines of cooking, re-supply, and troop rotations.  Deepening the connection was the realization that both sides were enduring the same terror and stress of harsh conditions.

This led to a series of micro-truces in early November. At first, both sides stopped shooting at each other during meal times which happened day after day and created a common understanding.  The micro-truces then expanded in several ways. Both sides stood down on cold nights when soldiers ventured out to collect straw for warm bedding, and they extended to the point where soldiers would assist each other when moving casualties.

By the time Christmas Eve arrived, both sides had unknowingly communicated so many belonging cues that a Christmas Eve truce was almost a foregone conclusion.

If a culture of safety, respect and belonging can be created by enemies on the battle lines there must be a way to replicate it in organizations.  It turns out there is.

As Coyle points out, organizations that create a heightened sense of belonging can answer the following questions for employees:

How do you ensure the answer to all three is a resounding YES in your organization?

Here are some simple ideas you can take action on immediately:

Overcommunicate that you are listening and make active listening your superpower. Make eye contact, be fully present, be in proximity for face to face conversations, and use body language that communicates you care about what’s being said.

Get in the habit of catching people doing things right multiple times a week. This is a habit highly successful managers have mastered.

Build a moat around your culture by being vigilant over who you invite to join your organization and who you don’t. A thorough and robust hiring process that screens for values and skill is essential. It’s your job to ensure performance and behavior standards rise over time and doesn’t dilute.

This is difficult for many organizations, but it sends a strong signal to the group about the standards of behavior and performance. The expectations in your company are set by the lowest performers, not the highest.

Connect People’s Work to Their Impact

Human beings have an innate desire to do meaningful work. Ensure you clearly communicate how the work everyone does impacts the lives of your customers. Every single person in your organization needs to know their impact and how they matter.

Make Fun of Yourself

Shine a spotlight on your fallibility as a leader. Make a habit of admitting your mistakes and not taking yourself too seriously. This will show everyone it’s ok to fail and move on. The senior leaders set the tone for this.

Instead of “Not Shooting the Messenger”, Try Hugging Them

When someone delivers an unpopular opinion or has the courage to provide uncomfortable feedback ensure you accept it with a smile and embrace what they are saying and their willingness to speak up. Over time this will have a significant impact on cultural safety and openness.

Assuming you’re not already doing all of the items on this list, pick one and commit to doing it for 90 days. If you’re feeling really ambitious, share this with your team and have them do the same.  After all, reading an article doesn’t change your environment, taking action does. In the spirit of this article as Christmas Eve approaches one can’t help but imagine those brave soldiers who sacrificed so much to afford us the freedoms we enjoy today. Wishing you the peace and fellowship of the holiday season and a fulfilling 2020.