Today on Unleashed we are joined by Kim Cameron who became interested in Positive Organizational Scholarship as a result of a decade of studying the consequences of organizational downsizing. Organizations characterized by virtuous practices — forgiveness, compassion, integrity, trust, optimism, kindness—tended to avoid the declining performance associated with downsizing.

Observing this effect led to a variety of empirical studies on the effects of positive leadership and organizational virtuousness on organizational performance.

Cameron’s research has been identified as among the top 10 social science scholars in the world. Reports of his work have appeared in 15 scholarly books and more than 140 academic articles. The latest books include the Oxford Handbook of Positive Organizational Scholarship,  Positive Leadership and Practicing Positive Leadership.

Organizations are Wired for Ordinary

Kim opened the discussion with a reflection on how often our organizational goals are to be ordinary rather than outstanding. The very word, organization, suggests that it’s a system for keeping things predictable and organized, and we aspire for good enough. In a way, it is a restatement from Jim Collins’ book, “Good to Great” when he says that the “enemy of great is good.”

If we think of a spectrum with “normal” in the centre, and positive and negative deviations to the right and left, most research in business and otherwise focuses on getting back to normal. Medical research is a great comparison: Kim claims that 95% of research and knowledge focuses on the negative deviation from normal and tries to find way to get people feeling normal again. Healthy enough is usually the aspiration.

The problem here is that half the spectrum, the positive deviations, are rarely considered in our organization’s constant pursuit of getting “back to normal.” Kim calls this an abundance gap and it’s a huge missed opportunity for new ideas and world-changing, positive opportunities.

Further, Kim discovered that those rare organizations that are highly successful have a bias toward positive deviations and create a culture to unleash positivity. Having a positive deviance bias is driven by cultures that display a behaviour set he calls Positive Leadership.

At first glance, it can be easy to dismiss Positive Leadership when it espouses virtuous behaviours like gratitude, giving, kindness and generosity. We don’t usually equate those with highly successful and profitable companies. But Kim’s research debunks that myth. The data supports that companies with leaders and employees who display these virtues significantly outperform their peers. Kim described two cases – a hospital in Connecticut and a large financial institution – where this correlation was present, along with other empirical data. 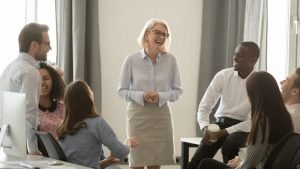 Kim’s work goes on to break down Positive Leadership into four behaviour categories:

Positive Climate and Environment – companies need to encourage people to be virtuous. Giving employees gratitude journals, promote writing hand-written cards, and making time in meetings and through other means to express kindness, forgiveness, generosity and gratitude so that positivity is institutionalized and becomes OK, even expected.

Positive Relationships – all organizations have what Kim calls net positive and net negative energizers. This hardly requires definition – positive energisers are those who bring optimism, complement others, act friendly and come with a glass-half-full attitude and infect organizations with those same attributes. And the more positive (the positivity density) energizers that make up the population, the more positive energy there will be; it’s contagious.

Positive Communication – how leaders communicate, particularly when it comes to bad news or difficult feedback, is a big component of Positive Leadership. Kim introduced a simple formula for giving difficult feedback based on a descriptive approach, rather than the more commonly used evaluative approach. In conversation, leaders should:

This process takes away an evaluation, the judgement aspects of the conversation (you can learn more about feedback from Sheila Heen in episode 3).

After the descriptive discussion, accountability comes into play. When someone wants to make a change, it’s important to identify very specific small action steps or wins, and then make it more difficult to fail than succeed. To illustrate, Kim shared an example of a friend trying to lose weight who reached an agreement with her boss to cut her salary if she didn’t take those steps consistently.

Positive Meaning – this aspect considers the fact that people want to give, to contribute, and more success can be achieved in companies where people are working towards a noble, common purpose, than those where employees are dominated by self-interest goals. One research study revealed that students dominated by contribution goals were more successful than those with self-interest goals in their time at college. Another study compared MS patients who were givers versus receivers and found that the wellbeing of givers was 8x greater than the receivers two years later. Doing something for someone else makes us better, and contribution is a superior predictive measure of success than recognition.

Getting to Positive Leadership doesn’t have to be a momentous undertaking. “Start with one percent,” suggests Kim. Try things like writing gratitude letters to others, ending your day by asking yourself or others what you did for someone else, or simply making a point of smiling more often are great starts. 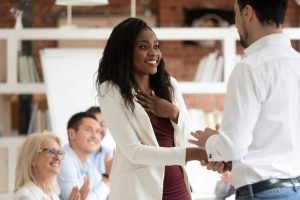 Take Your Leadership and Business to the Next Level

The link to Kim’s slide that was shown during the presentation can be found HERE. He also briefly described the Reflective Best Self Exercise and the Personal Management Interview (PMI) tools that are available online.

At Results, we care and we’re here to help. This Unleashed Series that we launched back Launched in April 2020, Unleashed has given us new information and insights, and led us to develop the Leadership Toolkit Workshop series, the first of which started in October. If you and your team would like to enhance your skills as leaders, please check it out (contact us for other dates too).

Further, if you would like to discuss the ideas presented today, please reach out via our contact form or on social media.

If you are interested in this and other topics, you can watch all episodes of Unleashed by subscribing to our YouTube Channel.